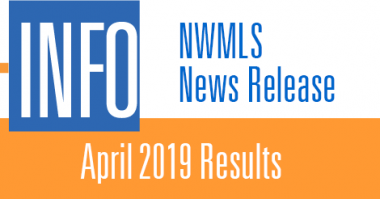 KIRKLAND, Washington (May 6, 2019) – Housing activity during April signaled good news for buyers in Western Washington as inventory continued to grow, the rate of price increases was slowing in many areas (and even decreasing in a few counties), and mortgage rates remained low.

Northwest Multiple Listing Service statistics for last month show a 28.5 percent overall increase in active listings compared to the same month a year ago, a 5.8 percent gain in pending sales, and a 2.4 percent rise in median prices for sales of single family homes and condos that closed during April. The volume of closings dipped slightly (down 1.9 percent).

Seattle Real Estate News May 2019 (continued):
“Listings were popping up like April flowers and the bloom has produced a vibrant and healthy market,” exclaimed MLS director John Deely, principal managing broker at Coldwell Banker Bain. “With an increased supply of listing inventory, low interest rates, and a positive economic climate, buyers are confident that this is a good time to buy,” he reported, while noting a larger number of buyers are opting out of competing with other buyers.

“This year’s buyers and sellers are approaching the market with more caution and a focus on an analytical, versus emotional approach that has ruled the last several years,” Deely said.

Northwest MLS members added 11,697 new listings to inventory during April for a year-over-year gain of nearly 3.8 percent. During the same period, brokers reported 11,188 pending sales (509 fewer than the number of new listings), resulting in net gains in the number of active listings in many counties, but changes in inventory were wide ranging across the 23 counties the MLS serves.

Seven counties had double-digit growth in inventory from a year ago, led by King County (up 78.5 percent) and Snohomish County (up nearly 57 percent). The number of active listings declined in 10 counties, with Jefferson County reporting the biggest drop at 24.8 percent. System-wide inventory at the end of April totaled 12,955 active listings, which represents a 7.8 gain from March.

“The spring market has arrived, bringing new listings and sales,” stated Dean Rebhuhn, owner of Village Homes and Properties in Woodinville. Sellers who have prepared their homes for sale are experiencing brisk activity, and buyers are finding more opportunities to purchase, thanks to low mortgage rates and increased inventory, according to Rebhuhn.

“As we head into the prime buying and selling season, we’re seeing better news for buyers in King County, with statistics showing there’s a bit more time to look and make a decision,” said Mike Grady, president and COO of Coldwell Banker Bain. Pointing to the 78 percent increase in total active listings in King County and the 57 percent jump in inventory in Snohomish County, he described the year-over-year gains as “impressive,” but noted there is still less than two months of inventory in many areas. “Buyers now have three-to-four weeks instead of three-to-four days to make a decision, so it’s still quite a ways from a balanced market,” he emphasized.

Gary O’Leyar, designated broker/owner at Berkshire Hathaway HomeServices Signature Properties, echoed Grady. “Despite the increase in inventory over last year at this time in King County, we are seeing a very robust spring market laced with multiple offers in many instances,” he stated.

Eight counties had double-digit increases in pending sales versus a year ago. In the four-county Puget Sound region, only King County had a double-digit gain, with a 15.1 percent jump in mutually accepted offers. Pierce County, with a 6.6 percent decrease, was one of seven counties reporting drops in pending sales. Even with mixed sales activity, supply remains tight.

Northwest MLS figures show both King County and its 23-county system have around 1.7 months of supply. “That is still slim compared to the National Association of Realtors’ data showing a national average of 3.9 months of inventory,” remarked O’Leyar.

“We just experienced a strong spring market and are now heading into the pre-summer phase of the housing cycle where more inventory but also more buyer competition is commonplace,” stated J. Lennox Scott, chairman and CEO of John L. Scott Real Estate. He expects momentum will continue “in line with positive job growth, lower interest rates and a strong U.S. economy,” but believes price appreciation will start to level out heading into summer. “All eyes will be on each new listing this summer, a welcome sight for home buyers encountering multiple-offer situations in the more affordable and mid-price ranges,” Scott added.

James Young, director of the Washington Center for Real Estate Research at the University of Washington, said low mortgage rates (averaging 4.4% for a 30-year fixed) are enabling buyers in outlying areas along the I-5 corridor to purchase in areas with cheaper prices, notably Skagit, Cowlitz and Whatcom counties.

“There are two key demographic trends driving prices along with mortgage interest rates,” Young said. “Older householders trading down are competing with first-time buyers along this corridor seeking value.” He used the example of an empty-nester Seattle homeowner deciding to trade down. “If I sell in Seattle to trade down, then I will have significant amounts of cash available from selling my existing home to be able to move to Mount Vernon or Cle Elum with cash left over.” First time buyers may look at the same relatively low priced areas as a place to raise a family. “With these two groups competing for value, this is a perfect storm for house price growth, particularly in regional markets,” Young believes.
See 50+ Seattle Zip Code Market Trends!

Seattle Real Estate News May 2019:
“Buyers need to be ready to rumble.”

“Listing activity in Snohomish County rose modestly in April but the rate of growth has slowed,” said NWMLS director David Maider. MLS figures show brokers added 30 more new listings than a year ago (1,746 versus 1,716), with total inventory up 56.8 percent. Pending sales rose 6.9 percent and prices were flat (up 0.84 percent).

Maider, the owner/broker at Windermere Real Estate M2 in Everett, described the jump in pending sales as “significant” and an indicator that there is clearly demand in the market. “We expect that mortgage rates will not move significantly as we move toward summer and that well-positioned and well-priced homes will still see significant interest from potential buyers,” he commented.

Another MLS director, Dick Beeson, principal managing broker at RE/MAX Northwest Realtors in Gig Harbor (in Pierce County), acknowledged the slowing rate of price increases in the Puget Sound region, commenting, “But the direction remains the same: higher prices.” He believes buyer demand and scarce inventory mean buyers need to “be ready to rumble,” since conditions don’t favor “faint-hearted buyers.” For sellers, he advised, “Don’t be stupid, increases can’t go on forever. Get a fair price and move on.”

“Interestingly, condominium prices in King County continue to fall as the number of properties on the market continues to climb rapidly,” remarked Young. MLS figures show prices in King County dropped about 9.6 percent and inventory surged nearly 122 percent compared to twelve months ago.

Seattle Real Estate News May 2019:
We are very slowly trending away from a complete seller’s market.

“Anecdotally, this corresponds with possible regulatory and tax uncertainty signaled for private landlords in Seattle ahead of local government elections. Given this situation and significant supply in the multifamily sector coming online, many smaller landlords may be selling to lock in capital value growth and exit the rental market ahead of the November election,” Young suggested.

Some developers of new condo projects are reporting strong activity. First Light, a 459-unit development to be built at 3rd and Virginia in downtown Seattle, has announced more than half the units in the 48-floor tower have been reserved prior to groundbreaking.

Looking ahead, Grady believes, “We are very slowly trending away from a complete seller’s market,” citing single-digit increases in sales prices, “instead of double-digit increases we saw in 2018,” and the lack of inventory. “We believe these two considerations will now move sellers who have been waiting to sell in order to take advantage of equity gains to finally take action.”